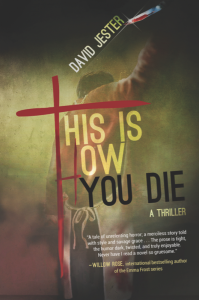 The violent, dark, and twisted journey of an emotionless, hate-filled, obsessive young man who becomes a clinical and prolific serial killer.

Herman isn’t like other teens his age. He isn’t like the academic elite, the geeky students who get all the grades and are adored by their teachers. He isn’t like the extroverts, the socially adept and popular kids who never want for anything and always have a shoulder to cry on. And he isn’t like the bullies, the ones who taunt and beat him on a daily basis. Herman isn’t like any of his peers, or indeed anyone he knows. The person Herman identifies with the most, the person he idolizes and yearns to be, is The Butcher, a brutal and prolific serial killer.

Following yet another beating by the kids he despises at a school he hates, Herman returns home to his inconspicuous existence with his solitary, silent, and coldhearted father. But life for Herman is about to change. The shackles that have held him to mediocrity and anonymity are about to be broken. Not only does Herman discover his father has died, but on further examination, he also discovers his dad was The Butcher, the very man whom everyone had feared and whom he had worshipped.

Now, if only Homicide Detective Lester Keats would just leave him be. . . .